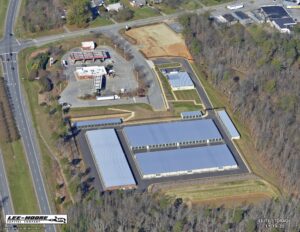 Elite Storage Greensboro, a project by Lee-Moore Capital Company and Central Moving & Storage Inc., opened for business July 2020. The building contains 73,000 sq. ft. of self-storage with a variety of units, including climate and non-climate controlled.

The facility consists of both an onsite manager and a stand-alone kiosk, allowing for 24/7 rental accommodations. Located just off of Old U.S. 421, Elite Storage offers clean, affordable and secure units in Greensboro, NC.

Capstone Apartment Partners announced a $62.5 million sale of Waterside and Watercourse Apartments on behalf of Eco Group, a collaboration of Lee-Moore Capital Company and Montgomery Development. Partnering with 10 Federal of Raleigh to bring the apartments to market, Eco Group received close to $141,000 per door with a sub 5% cap rate.

Hundreds of community members, developers, investors and future business owners joined the MOSAIC Development Team in officially celebrating the construction launch of this 44-acre mixed-used development, serving as the gateway to Chatham Park, a 7,100-acre live-work-learn-play community in Pittsboro, NC.

Kirk Bradley attended the American Battlefield Trust (ABT) Day on the Hill on March 5 – 6, 2019 in Washington, DC. He serves as an ABT Trustee. The ABT mission is to “preserve America’s hallowed battlegrounds and educate the public about what happened there and why it matters.”

Kirk heard Woody Williams—sharp as a tack at 95—speak about his service as a marine and his support of saving battlefields. Woody served as a flame thrower in the assault on Iwo Jima and saved countless lives with his heroism; he ultimately witnessed the flag raising on Mount Suribachi. Watch this video of Woody and others share their experience on ABT saved land.